The following blog has been provided by Eleanore Nash, our GLOSSY Editor from the UK!

Body confidence is all about learning to love the body you have and feeling good in your skin. Believe me, I know how hard it can be to reach that level of self-confidence. From quietening your inner critic (I call mine Edna, she pops up at the worst of times and is pretty cruel) to ignoring societal pressures, it’s a long and on-going process. Fortunately, more and more beauty and fashion brands, as well as influential celebrities and musicians, are using their platforms to spread body confidence.

With that in mind, I thought I’d share the top five most empowering moments of 2020 so far to encourage you to be more body confident.

If you’re not hooked to this new social platform yet, trust me, you will be soon! A network where users share short, often comedic videos, it has recently become a stage for self-love. Users have been sharing short clips of themselves alongside images of paintings, sculptures and other historical works of art to highlight that their perceived ‘flaws’ were once considered muse-worthy. The underlining message, of course, is that conventional beauty standards change from society to society, and that they are in fact incredibly beautiful.

Miranda Lauren (known as @molosal), for example, celebrates her curls in an empowering compilation. Whilst the video opens with her starting to straighten her, it then cuts to a range of portraits of curly-haired women. She writes: ‘It took me 19 years to fall in love with my curls, I wish it would’ve been sooner’. The post has received thousands of supportive comments and been watched more than 544 thousand times.

Similarly, Lila (known as @tiktokyoulater) celebrates her aqualine nose and its portrayal across time and cultures by superimposing images of women in profile. She states ‘aquiline/hooked noses are beautiful & a part of so many nations & cultures around the world and it would be an injustice if I hated mine like I used to’. I couldn’t agree more!

Social media can often be a negative place, as we compare ourselves to others, scroll through cruel comments and can’t help but judge those who we feel are judging us. So, I’m in full support of this new self-love trend and am so excited to see more and more women embrace the parts of themselves that once made them feel self-conscious.

ASOS have long been pioneers of the body confidence movement. They were one of the first brands to stop airbrushing out models’ stretch marks and cellulite, but now they have taken things one step further. The online retailer has become the first in Europe to trial a new feature that generates previews of what the same outfit looks like on different body shapes using Augmented Reality (AR). 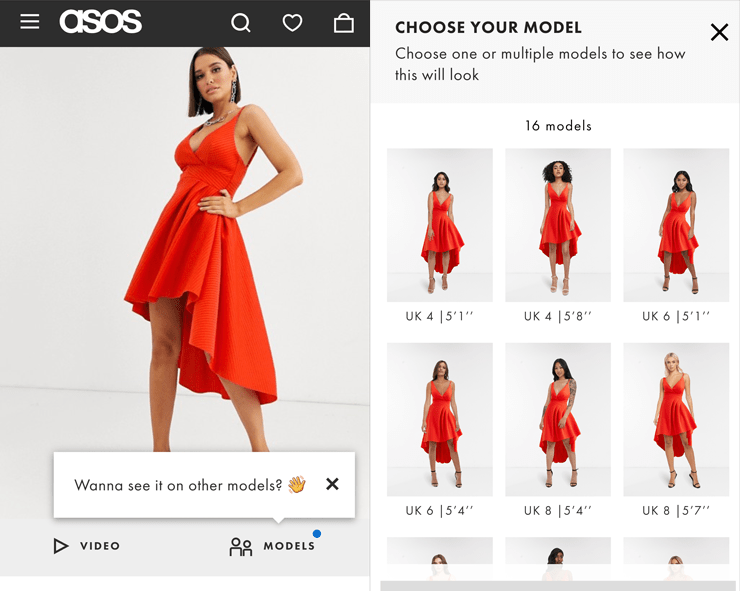 Essentially, it allows you to see a simulated view of a product on the body type that most reflects yours (you can select from a range of heights and sizes). So, if you’re tired of shopping online and constantly seeing very similar body types that aren’t your own, and consequently struggling to imagine what the clothes will look like on you, then you are going to love their ‘See My Fit’ addition!

Whilst the feature has now been taken down following this initial trial, ASOS have announced that the official launch will include models that represent the full range of sizing available on their site. A step towards size inclusivity? There’s no doubt about it! I can’t wait for the final version to go live. 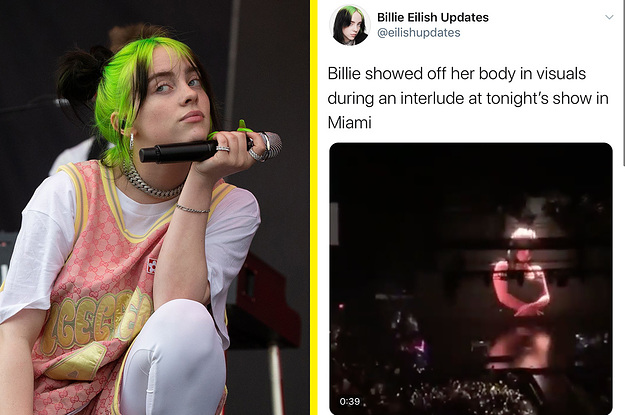 Reported on Buzzfeed, the five-times Grammy award-winner and singing sensation regularly sports oversized clothing. In fact, it has become Billie Eilish’s staple look. Her decision to flaunt these clothes, though, isn’t just a choice. It’s also a statement. In an interview with Vogue Australia last year, she stated that her fashion choices ‘give nobody the opportunity to judge what my body looks like’.

The Bad Guys singer has since re-emphasized this point on her tour by featuring a video where she addresses the idea of people judging each other’s bodies. In the clip, she slowly undresses as a powerful message about body shaming plays over the speakers:

“If I wear what is comfortable, I am not a woman. If I shed the layers, I am a slut. Though you’ve never seen my body, you still judge it and judge me for it. Why? You make assumptions about people based on their size. […] While I feel your stares, your disapproval, or your sigh of relief, if I lived by them, I’d never be able to move.”

Whilst Billie rarely shows off her curves, she has used her tour as a way to send a positive statement about body shaming: other people’s opinion about her body is their responsibility. She won’t let it affect her and others should try to ignore everyone else’s opinion too. You have to admit, it’s a pretty powerful proclamation.

Stay tuned for more body positivity posts this month during our #nofilter series!

#nofilter: Why Being Sporty Doesn’t Mean You Aren’t Feminine

Our Favourite Hydration Boosting Moisturisers For Under $30!